This website uses first and third party cookies to improve usability and collect statistical data of your navigation on the site. By continuing to browse this site you accept the use of said cookies. For more information see our cookies policy. OK

The coast of Begur offers a coastline of unparalleled beauty, in which the cliffs, the pines, the hidden coves with crystal clear waters, and the rugged coastline, make this area the most beautiful of the Costa Brava. Begur has eight coves and beaches, located at the foot of the town, with completely varied characteristics and beauty. The first beach from the north of Begur Beach is the Corner, found next to the neighboring town of Pals. It is the widest beach of Begur and can be reached on foot from Sa Riera, through a pleasant walkway that leads to the first cove Illa Roja and then reaches Beach Corner. Following the coast of Begur south-west is the Illa Roja bay, an internationally renowned nudist cove. This beautiful beach, one of the most emblematic of the Costa Brava, is characterized by a chaired by a reddish rocky islet that gives its name to the cove. It is quiet, no crowds, fine sand and clear waters. Also in the north are Beach Begur Sa Riera, one of the largest population with more than 300 meters long. Its geographical location is excellent, as is the one closest to the Begur: right, has sheltered cove Puerto del Pi, and left the cove of the King. From the latter and the walkway can be reached, even walking on the island and the beaches of the Red Corner and Pals. Sa Riera retains its traditional character, there are the old houses of fishermen and also offers various sports activities and tourism services. Located in eastern Begur are Aiguafreda cove. The tranquility that surrounds it, along with the water source available, making it a perfect place to celebrate family meals, and at the same time enjoy the beauty of the landscape. This is a collection bay naturally protected by the Lead tip and head Sa Sal, unspoilt ancient and notable for its calm waters, pure and crystalline. Sa Tuna, located east of the village of Begur, is a winding creek with access which is a discovery for those unexpected visit. This stony cove offers a nice bath in clean and transparent waters and quiet walks to admire its beautiful natural surroundings. In the southern coast of Begur Platja Fonda are located at the foot of the imposing Cap de Begur. This cove is very unique to their physical characteristics, therefore, need to download a large scale before discovering this hidden and wild. This natural hide, with thick sand and dark, has remained untouched and preserved a primitive purity rarely found in other parts of the Costa Brava. Because of its difficult access, the beach service has almost no equipment apart from a summer beach bar installed. It is one of the most peaceful places around the coast of Begur. To the south are the coves of Begur Fornells which include the marina and the house that Bonaventura Sabater, known as Boy, was built above the port of Ses Orats; called Paradise and, according to tradition, was the place where he was baptized this coast, a hundred years ago, the well-known name Costa Brava. The walkway serves as a link to get all the little creeks that form the core of Fornells: north, the narrow cove n'Estasia and heading south cove Ses Orats, followed by Cala 'in Malaret. 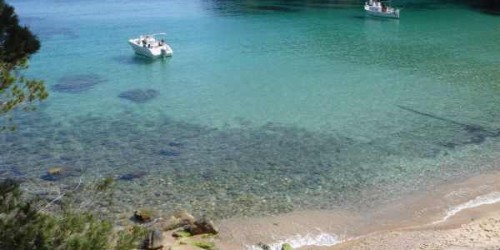 The last beach belonging to Begur, located south of Fornells is the cozy beach Aiguablava characteristic for its clear waters and shallow, and its fine sand and clear, perfect for a large family day, friends...

It's our 10th anniversary!

And we want to celebrate it with you

Feel the charm of Begur again, with a -10% discount booking through our website. Relax and enjoy the Classic in complete safety!

We are waiting for you!